Bras were first invented in 1910. A woman seeking an undergarment that didn’t show beneath her evening gown sewed two handkerchiefs together and used ribbon to tie the device closed. Her idea became popular among her neighbors, and drew corporate attention. The idea was sold to the Warner Brothers Corset Company, and the first commercially produced bras were produced in the early 1920s. These bras were designed to contain and flatten the breasts, operating by clipping to the lower half of a corset.

In the 1920s, as skirt hemlines became shorter, bloomers also shortened, first to the knee and then to the mid-thigh. Elastic waistbands were introduced, and bloomers became more comfortable to wear. By the end of the 1920s, bloomers resembled modern panties, only with wider legs like modern shorts. In 1922, a Russian immigrant changed bras to provide support and uplift the breasts rather than flattening them down. 1922 was when the word lingerie was first used in a public setting. 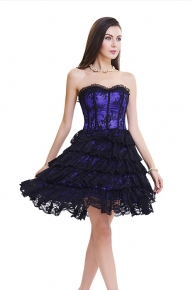 The 1930s saw the invention of nylon, which quickly became a popular material for panties, but few changes were made otherwise. The word brassiere was first shortened to bra in this era, and adjustable bands with multiple hooks and eyes were invented to provide better support. Other additions to bras during this time included adjustable straps, patterned fabrics, lace, and padded bras were introduced for smaller women.

By the 1940s, the common brief was invented. Many women switched over to this new legless style, and modern panties were born, offering support without being too uncomfortable under the clothing. The garter belt was also invented in this time. Meanwhile, many companies began to require that women, forced to work because of World War 2, wear bras while they were on the job. The underwire was invented as clothing styles became more curve oriented.

In the 1950s, undergarments ceased being only white and hidden from the public eye. It was no longer shameful to discuss underwear, and stores began offering selections proudly rather than hiding them away in a rarely spoken of corner. Colors and patterns became available as well as new fabrics like rayon and nylon. The nursing bra became popular during this era.

By the 1960s, the style of panties grew to include hip huggers and bikini. Bras were constructed out of tougher material to withstand the abuse of early washing machines. The Wonderbra was created in 1964, offering flat-chested women the chance to finally appear otherwise.

The 1970s saw the invention of the thong, and the strapless bra was invented, allowing women to wear skimpier outfits while still being covered underneath. The first sports bra was introduced. New materials allowed bras to become more form-fitting. Different shapes and cleavage offerings became popular among bra manufacturers.

In the 1980s, the G-string became fashionable as a South American swimsuit style, and quickly spread world-wide. The 1990s saw manufacturers of both bras and panties becoming more focused on comfort than on fashion. Since then, bras and panties have continued to become better, but no major changes have been recently made.