The Pan-Am television show is a program based on the infamous airline with the same name and is directed by Thomas Schlamme and was written by Jack Orman. These men have talent, as we have enjoyed their great programs like West Wing and ER, which were very successful. The TV series is about the lives of the pilots and flight attendants of the Pan-Am airline. This show started on 25th September 2011 but it is not only the cast hat was exciting but what they wore was a thing to be taken note of. The show takes us back to the sixties when American women started leaving their housewife role and began showing the true meaning of a woman.

The flight attendants in the series put on sexy but elegant airline uniforms and they look glamorous. Sexy has never felt so good and this Halloween night, sexy has got its grove back as women are going out to purchase themselves a Pan-Am flight attendant outfit. There are two kinds of outfits to pick from and you will really enjoy them. If you love flirting, then the skimpy Pan Am stewardess outfit will do the job for you and if you want the sophisticated look, the 4-piece true classic flight attendant costume is what you need. Christina Ricci is waking up the fashion runway and blue has certainly not felt this great because it is like she’s rejuvenating what we might notice as old back to the spotlight and making it golden. 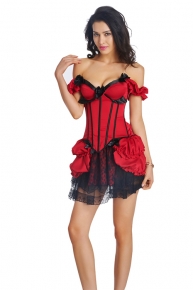 On this Halloween night don’t go dressing up like Cinderella or Snow White, as a substitute buy the Pan Am flight attendant costume and see just how many heads turn to gaze at your Halloween Costume. The show is not only very inspiring for Halloween but also for the fall season, therefore the jet blue sky has fallen on everyone.

Perhaps you would like to know something more about this costume that will be doing many rounds of trick or treating . The undergarments according to Christina stop you from doing anything boyish like taking large steps on the staircase. The bra which really is a corset makes you remain really straight therefore you will talk and walk like a proper lady.

The Pan-AM Flight Attendant costume is for the lady in you. The small hats have been designed in a way that they go with the hat rule of the sixties when a hat was not supposed to go back far on your head. That is until finally Jackie Kennedy broke that fashion rule with her own. The fabric for the blouses was sculpted, in that they can be wrapped round around the body and it does not wrinkle much. The stockings on the show don’t stretch and many pairs are worn during the shooting because the stockings can get torn at any time and no proper lady puts torn nylons on. The Pan-Am airline was the best airline during its time and it is now the hottest show on the air. Anticipated by many people who want to relive the days when the women were daring and reached new heights. You may desire to do the same thing this Halloween and you will surely be sending happiness into the air.