Skip to Content
Home Popular What Corset Styles Are There To Make A Corset In?

What corset styles you want to make your plus size corset in will be down to personal preference but first you need an understanding of what the different corset styles are and how they will look and feel.

The two main styles of corset pattern are the hourglass corset shape and the conical corset shape. Then there’s the ‘waist cincher’ also known as the ‘waspie’ and the even shorter corset belt. The more exotic styles are the pipe stem and the S bend and you also have your historical corset shapes, the most prominent of which is the Elizabethan corset pattern – the Victorian corset is the one our modern-day corsets are based on and so I do not consider it a separate corset shape. There are a number of historical corset fanatics out there who would strongly disagree I’m sure! But for the purposes of writing this introduction to corset styles for the beginner, the subtleties of a historically accurate Victorian corset can be disregarded. 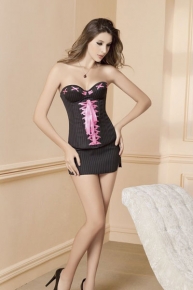 So first lets look at the hourglass and conical corset shapes which come as either an ‘overbust’ or ‘underbust’. If your not familiar with these terms they’re pretty self-explanatory; an ‘overbust’ comes up over the chest and has a bust area that cups the bosom. An ‘underbust’ stops short of the bust area and normally stops just below where the band of your bra starts. You can get an in-between corset that stops half way up the bosom giving lift to the bra and creating a more dramatic cleavage but they are less common. The difference between hourglass and conical corset styles is in the rib area; hourglass corsets allow for the ribs by curving out in a slightly round shape from the waist upwards.

A conical corset, like the name suggests, does not round at the ribs but goes straight up and out from the waist up like an upside-down cone. This squashes the ribs in and produces what wearers of this type of corset consider a more pleasing shape. This gives you the traditional Victorian waist. This second type of corset style, if worn as a tight-lacing corset (which are worn 23 hours a day 7 days a week) will permanently alter the positioning of your ribs.